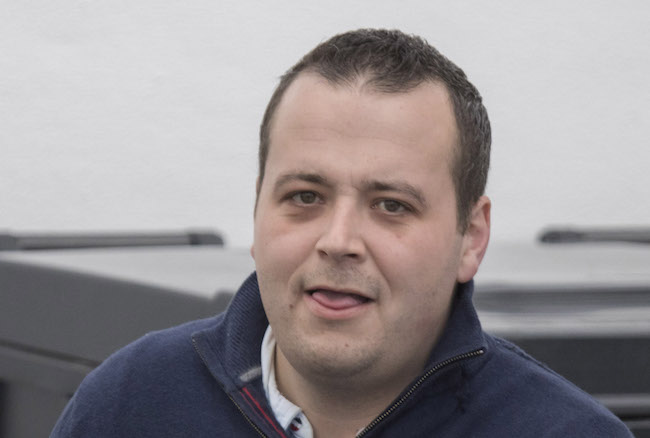 A man who threatened to kill Gardai and rape their children when he blitzed a Garda station with abusive calls from Australia has been jailed for almost four years.

Mark Fair, aged 28, was on the run when he phoned Gardai at Buncrana Garda station in 2015.

Over the course of 17 days, Fair called the Garda station numerous times and ranted at five female Gardai with a succession of threats and abusive language.

He even asked for Garda Gary McLoughlin, a tragic officer who was killed in the line of duty in December 2009.

Passing sentence Judge John Aylmer described the threats to kill Garda Elaine Moyles and her husband as being at the upper end of the scale.

He also said that threats to the five female members of the Gardai as “cowardly.”

“I am not placing emphasis on the fact that most of the victims were female but this was a fairly cowardly element of the offences. The calls were particularly menacing in nature. The calls were very particular and very violent and of a vile sexual character,” added Judge Aylmer.

Lettertkenny Circuit Court was told that officers could tell it was Fair making the vile calls and threats as they had dealt with him before but he continued to make threats against them and their families.

He previously appeared in court where he pleaded guilty to a total of eleven counts of making threats to kill, threats to damage property and also making grossly offensive phonecalls.

Details of the shocking calls made by Fair, of Ballinahone, Fahan, were read out in court.

He recognised her voice and told her he was going to shoot her in the back of the head and also kill her husband.

He also asked how Gary McLoughlin was and said he was going to land at Buncrana Garda station and pull the plaque off the wall which was dedicated to Gary.

The former Garda McLoughlin, aged just 24, was killed in the line of duty in Co Donegal in December 2009.

Fair called the Garda station at a later date and spoke to Garda Grainne McLoone and said he was going to rape her and her children and that he hoped her mother died of cancer.

He pretended his name was Martin McDermott, a man charged in connection with the death of the late Garda McLoughlin.

On January 12th, Fair called the station again and told Garda Lorraine Crawford that he would bend her over and ride her before going on to say he would rape her son and sister “just for sport.”

On another date, he called the station and asked Garda Sgt Carol Doherty if Garda McLoughlin was there which caused her great upset.

And on January 27th, Fair called the station again and he spoke to Garda Una Cunningham.

He said he would show her his cock in court and that he was going to rape her dog.

He asked Garda Cunningham if she wanted to suck his cock and that he was going to raise Garda Gary McLoughlin from the dead.

A victim impact statement on behalf of all the Gardai who received abusive calls from Fair was compiled by Sgt Carol Doherty and was handed into Judge John Aylmer but not read in open court.

As well as the litany of abusive phonecalls and threats, Fair also pleaded guilty to eleven counts of making gain or causing deception using Donedeal.

Over a two month period from February to March in 2018, Fair placed fraudulent adverts on the free ads website and also replied to adverts.

Among the items he advertised or responded to as having for sale was tickets for the Champions League Final, iPhones, tractor parts, gearboxes and car bumpers.

However, when the cash for the items sent to various accounts belonging to Fair, the goods were never forwarded on.

In total Fair admitted defrauding people from across the country out of more than €3,000.

When arrested Fair admitted that he used a ‘fraud phone’.

He apologised to all those he had defrauded money from and said he had already compensated two of the victims.

Barrister for Fair, who had 36 previous convictions, Mr Peter Nolan said there was simply no explanation for what he had done.

He revealed how he was from a respectable farming family and that his six siblings, three brothers and three sisters, had never been in trouble with the law.

He said that when he was making the phonecalls from Australia his client was drunk and was in the company of other young men from the Buncrana area of Donegal.

Fair apologised to the female Gardai and said he never planned to carry out any of his threats.

He added “I don’t remember making them (the threats) I was so drunk. I thought it was funny at the time but it’s not funny now.

“I’d like to apologise to all the Gardai as nothing I said was true and it wasn’t going to be carried out.”

Barrister Peter Nolan said his client was a fantasist and claims that he was living the high life in hotels such as the Gresham in Dublin for the proceeds of his crime were not true.

He said his client was now in custody for seven months and that he was a model prison in the prison and was working in the kitchen.

Fair’s mother was also in court but said she did not want to address the court.

Passing sentence Judge Aylmer said the threats to kill and cause damage to the property of Garda Elaine Moyles carried a sentence of ten years.

He placed this charge in the mid-range of such offences and one which merited a sentence of seven years before mitigating factors were allowed.

He said the 7 charges of making gross and menacing phones carried a sentence of five years and he placed these particular offences at the upper end of such offences and merited a jail term of four years on each charge.

On the fraud charges, Judge Aylmer said they may appear to be small on an individual basis but together they were more serious and merited a charge of 3 years in jail on each charge.

Judge Aylmer reduced all charges because of his early plea, the fact that he had shown remorse and that he was now a model prisoner.

He sentenced Fair to a total of 3 years and nine months on the charge of making threats to kill Garda Moyle but back-dated the sentence by seven months to when Fair first went into custody.

All other sentences are to run concurrently.

Fair, wearing a blue top and jeans, showed no emotion as he was led away in handcuffs by prison wardens.