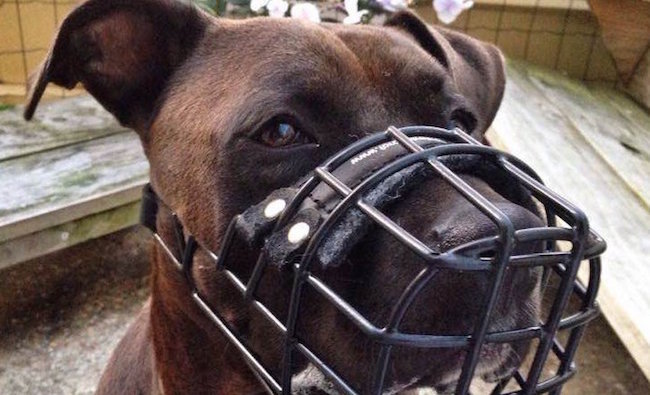 An Inishowen man has been ordered to pay €300 to an animal charity after local residents complained to Gardaí about ‘pit bull’ type dogs roaming around a housing estate without muzzles or chains.

Martin O’Connor, of 34 Donagh Park, Carndonagh, was charged with having an uncontrolled dog at Donagh Park on September 23, 2018, when he appeared before a special sitting of Buncrana District Court.

He was also charged with having no muzzle for the dog, no identification collar and no chain on the dog at the same location.

Defence solicitor for Mr. O’Connor, Philip White, said his client accepted the charges, although he claimed it was a case of ‘who let the dogs out’.

Garda Conor Mulkerrins told the court that he received a report about two ‘pit bull type dogs’ roaming around the Donagh Park housing estate and causing concern to residents.

He said he went to the estate at 12.05pm on September 23, 2018, and there were two dogs loose in the estate. He said he believed they were a Staffordshire Bull Terrier breed.

“The bitch was brown and white and the male dog was white,” Gda. Mulkerrins said.

“They were unsupervised and had no muzzle on them. Residents informed me this was an ongoing issue within the estate with the dogs and children were afraid to play out in the estate.”

Gda. Mulkerrins said he returned the dogs to number 34 Donagh Park after being informed that is where they lived.

“The side gate of number 34 was open and there was no one home,” he said.

“There was a compound built behind the house for the dogs but it was unlocked.

“There did seem to be a lot of money put into building the structure but the gate was a bit flimsy – it could have been opened but also the dogs are big dogs they could have opened it themselves,” Gda. Mulkerrins surmised.

He said nature and look of the dogs made people feel understandably uneasy, however he said he had no problems with them.

“I used to own big dogs so I would be used to them,” he said.

“When I put the dogs back into the house they just followed me. There was no problem with them.”

Solicitor White said when Mr. O’Connor and his partner left the home that day the dogs had been locked into the compound. He said there had been complaints from residents about dogs barking.

“When he left the dogs were secured and the compound was kept contained,” Mr. white said.

“Mr. O’Connor believes someone let them out because of the complaints and then called the gardaí. He has since put a padlock on the compound so only he can let them free.

Mr. White said Mr. O’Connor no longer lives at the property and has since moved to Derry, with the dogs. He said he works as roofer and has always kept and cared for animals.

“They’re always leashed and muzzled when they are out and in all usual circumstances.”

Judge Paul Kelly told Mr. O’Connor that he hopes he had learned from this experience in court.

“Dog owners frequently have a different outlook on their dogs than the rest of the world,” said Judge Kelly.

“These are potentially very dangerous animals and could be very frightening to other people, especially children.”

Mr. O’Connor said he had a child himself and there was no issue with his pets.

However Judge Kelly said the dogs could lose control easily.

“They might be placid and docile creatures with you and your child but what if someone does the wrong thing in the housing estate, they lose control and the next thing a child is left with half its face falling off,” said Judge Kelly.

“We’ve seen it happen too many times.”

Judge Kelly ordered Mr. O’Connor to pay €300 to animal charity the ISPCA by November 19. He said he would strike out the charges against Mr. O’Connor on this occasion if the receipt was produced.

Judge warns dog owner – “A child can be left with half its face hanging off” was last modified: October 9th, 2019 by Stephen Maguire
FacebookTweetLinkedInPrint
Tags:
CarndonaghcourtDOGfinedMartin O'Connormuzzle