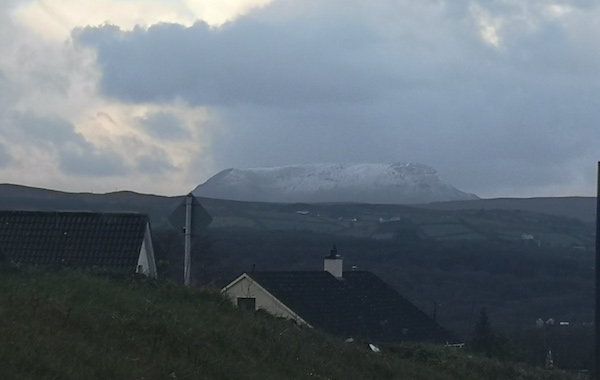 Donegal could be hit by snow this weekend during what is expected to be “raw and very frosty” weather spell.

Met Eireann has confirmed parts of Ireland will be waking up to blanket of white on Sunday morning.

Showers will turn “increasingly wintry” on Saturday night, and brisk winds will hit as temperatures are set to plunge to -3C.

A Met Eireann forecaster said: “Feeling raw this weekend; bright sunshine but wintry falls in places too. Very frosty at times also, with some icy stretches.

“Saturday will be very cold with an added wind factor, owing to brisk westerly winds.

Temperatures have already been getting lower this week with a dusting of strong sleet hitting the county on Wednesday morning last.

Our picture shows Muckish after it received a light dusting of snow on Wednesday morning.

It will be a frosty and icy start to Sunday and wintry showers may continue throughout the day. There will be overnight lows of -3C.

Met Eireann forecast: “Some lying snow to begin, mainly across parts of the west and the north midlands.

“Frost and ice in parts too. Scattered wintry showers during the day, but winter sunshine at times too.