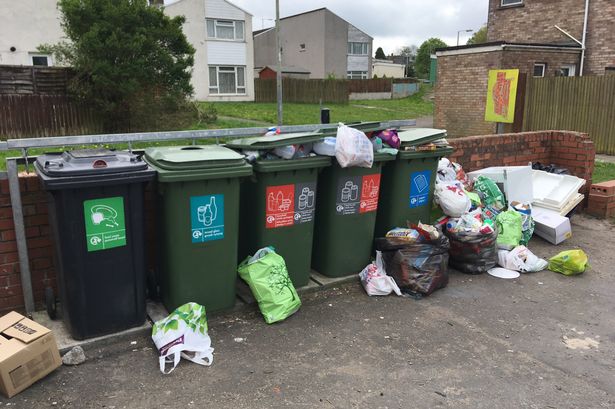 A Judge has slammed the public for dumping recycled waste at recycling centres when they are overflowing already.

Judge Paul Kelly was speaking at Dungloe District Court in Co Donegal in the case of a woman accused of dumping a cardboard box at a recycling bank.

Grandmother Agnes Ward, aged 61, is charged with littering after being brought to court by Donegal County Council.

Solicitor Jacqui Sharkey told the court that Mrs Ward was not even in the country as she was on holiday but the car was driven by her daughter.

Solicitor for Donegal County Council, Kevin McElhinney, said CCTV footage of the incident showed a cardboard box being thrown out of the car close to the recycling bank.

Solicitor for the accused, Ms Sharkey described the site of the recycling bank as being in an “absolute mess.”

“It’s an absolute mess an a disgrace anyway and that appears to be like that on a regular basis,” she said.

She added that Ms Ward’s daughter had made the effort and gone to the recycling centre and that leaving the cardboard box at the centre was a “tiny blip.”

However, Judge Kelly criticised anyone who simply brought litter to recycling centres and simply dumped the rubbish there when the centres were full.

“I simply cannot understand why people bring bottles to recycling banks and leave them there when they are full.

“These centres are festooned with signs asking people not to leave these materials when they are full.

“These people then expect someone else to clean up after them.

“If I go to a recycling centre and it is full I will bring my bottles home and I will bring them back on another day,” he said.

He fined Ward, of Curransport, Meenlaragh €10 and also ordered her to pay €250 costs to the county council.

He added that perhaps Ms Ward should seek to recover the costs from those who were in her car.