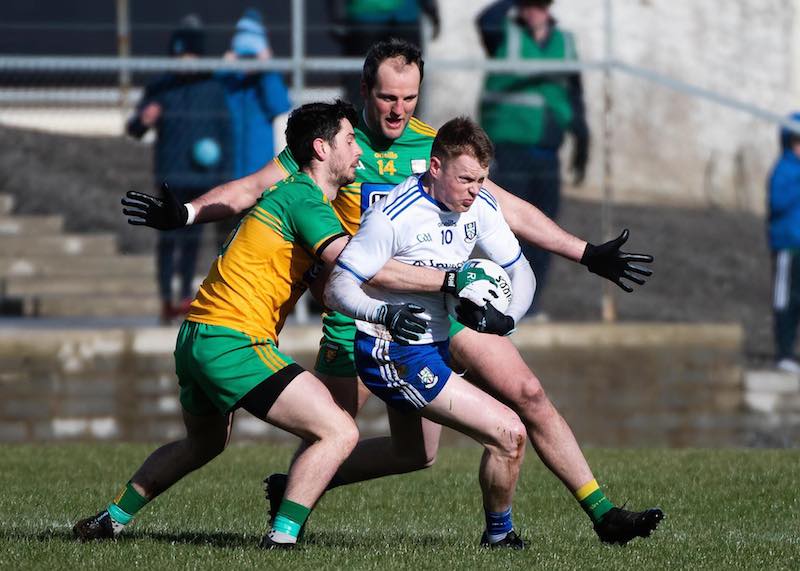 Goals ease Donegal to win over Monaghan – and closer to survival

DONEGAL took a step closer to Division 1 survival with a ten-point win over Monaghan at Fr Tierney Park.

Goals in either half from Caolan Ward and Hugh McFadden eased Declan Bonner’s men to a valuable win.

Donegal led from start to finish with Ward’s goal on 32 minutes giving them a sufficient advantage and McFadden put the game firmly beyond Monaghan’s reach with the second goal in the 55th minute.

After suffering successive defeats to Galway and Dublin, when they had handsome leads each time, Donegal never appeared in danger of letting their lead slip here.

Midfielder Michael Langan hit five points for Donegal as his excellent form of 2020 continued. The St Michael’s man kicked some super scores and also provided the assist for the opening goal by Ward.

Monaghan’s hopes of staging a comeback evaporated when captain Ryan Wylie – who spent ten first-half minutes in the sin bin – was sent off after being booked for a foul on the heavily-involved Langan in the 47th minute. The Monaghan skipper had no complaints as he trundled off.

The second goal by McFadden was punishment enough for Monaghan on 54 minutes, but the Farney lost ‘keeper Rory Beggan in the same incident.

Beggan was black carded after dragging McBrearty down. In a one-v-one with the Donegal forward, Beggan had little option, but the indiscretion drew an end to a forgettable afternoon for the Monaghan number 1.

The ironic cheers of the home support greeted two wayward frees by the Scotstown man in the first half. He fared little better with a ’45 early in the second half when, electing to pass to Dermot Malone, Beggan was also wide.

Beggan made the long walk after having to endure the prior pain of watching McFadden hammer into an empty net to put Donegal nine points in front.

The weather was as erratic as the play for much of the first period, with a strong sunshine peeking through in between driving sheets of hail that heaped down on Ballyshannon.

Donegal held a six-point half-time lead, but the worry was not just a penchant for giving up winning positions, but the fact that Donegal had to play into the elements in the second half. By the time the ball was thrown in for part two, the afternoon was considerably calmer overhead.

Three minutes before half-time, Ward had plundered to the bottom corner in style for the game’s first goal.

The St Eunan’s man riffled in his second goal of 2020, having netted against Derry in the Dr McKenna Cup.

Langan picked up the pieces when Michael Murphy was crowded out of possession and offloaded to Ward, haring in on his right-hand side and the Letterkenny man arrowed powerfully past Beggan.

Ward’s goal opened up a five-point lead for the hosts, who were well in command.

Donegal included Patrick McBrearty for his first start of 2020, the Kilcar man having come off the bench during last Saturday’s defeat to Dublin in Croke Park.

Despite indicating during the week that Jamie Brennan, who hobbled off against the Dubs, would be passed fit to play, McBrearty took the place of the lively Bundoran ace, who was deemed not ready for action.

Showing no ill effects of a winter in America, McBrearty popped over the game’s opening pair of points, the second a clever first-timer from distance.

Ciarán Thompson landed a fine point from 40 metres after Caolan McGonagle’s pass inside opened the solace for the Naomh Conaill man.

Late in the first half, Langan boomed over two fine scores to put Donegal in front by six, 1-5 to 0-2, at the changeover.

Michael Murphy mightn’t have got on the board here, but the Donegal captain still managed to contribute so much, not least a heroic block to prevent Kieran Hughes from scoring in the 39th minute.