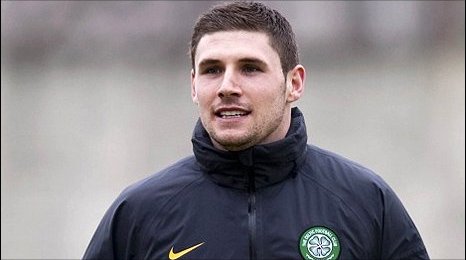 SUPER Celtic played Hearts off the park at Tynecastle tonight to close the gap on Rangers back to a single point and take the title down to the last games this Sunday.

Celtic played good football against 10-man Hearts in a game which will now be overshadowed by an attack by a sectarian bigot Hearts fan on Neil Lennon.

Gary Hooper had just slotted in his second goal of the night when the crazed thug emerged from the Tynecastle stand to confront the Celtic manager.

Hooper scored after 12 minutes before David Obua was sent off and added his second four minutes after the break.

Kris Commons was sent off after celebrating a 78th-minute wondergoal.

And the win means Celtic are a point behind leaders and holders Rangers ahead of Sunday’s final round of games.

The Hoops have Motherwell at home (a week before playing them in the Cup Final) while Rangers travel to Kilmarnock who have been in poor form recently. Every Celtic fan in Donegal and from Donegal will be a secret Killie fan this Sunday.

Celtic need Rangers to lose or draw at Rugby Park to give the Hoops a chance.

Celtic had gone into what was always going to be a potentially fiery encounter knowing that a defeat would hand the title to their Glasgow rivals.