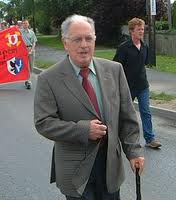 A FORMER President of Sinn Fein, Ruairi O’Bradaigh, has died on Wednesday afternoon.

It is understood he passed away at Galway Hospital surrounded by his family.

The octegenarian had been suffering from the ravages of cancer for a number of years.

Mr O’Bradaigh was ousted as Sinn Fein president in the 1980s by Gerry Adams.

He later set up Republican Sinn Fein and was a fierce critic of Gerry Adams and Sinn Fein who he accused of ‘selling out’ Irish republican principles by signing up to the Good Friday Agreement and accepting the Police Service of Northern Ireland.