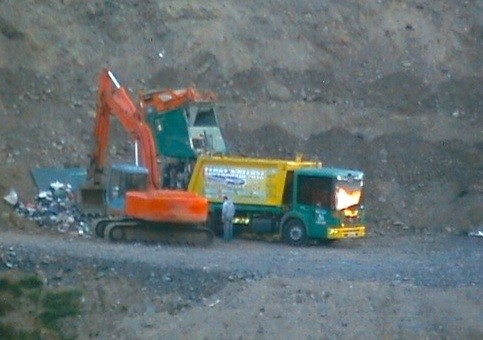 A BINMAN caught on camera illegally dumping in Co Donegal still hasn’t paid his €12,000 fine – more than a year after his conviction, a court has heard.

Jim Ferry, of Rossbracken, Manorcunningham, but originally from Falcarragh, contested 12 charges but was found guilty after a three day trial at Letterkenny District Court in October 2013.

The illegal dumping took place at Doire Uí Fríll, Falcarragh, on June 10, 2010 on land right in front of his own mother’s house (pictured).

In March Ferry withdrew his application to appeal the conviction when it came up before the Circuit Court in Donegal.

But at Letterkenny Circuit Court yesterday, Dara Foynes, barrister for the Director of Public Prosecutions told Judge John O’Hagan that the €12,000 fine hadn’t been paid. It should have been settled on April 29 this year.

She asked for a ‘distress order’ be attached to the fine and costs so that the State could liquidate assets to get the money.

At this point solicitor Ciaran McLaughlin asked for more time for the monies to be paid.

“It’s a situation where no-one came looking for the money,” he said.

Judge O’Hagan ordered that the money should be handed over by April 1 next year.