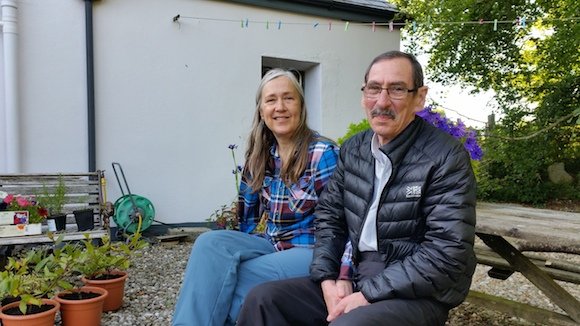 Her unique insight of life and experiences of living in the north-west has inspired a Ballybofey-based woman to publish a book of her songs which she hopes will capture her love of the area and the influences it has had on her.

Its author, Philippa Collings, describes ‘On Western Shores’ as a celebration of this part of the world, its people, wildlife, landscape and various goings on. 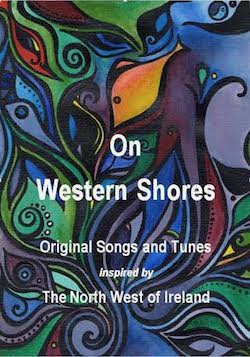 The cover of On Western Shores

Philippa and her partner Billy Patton came to the Twin Towns over 20 years ago and set up the Red Rose Café in Stranorlar. They soon settled and became a popular couple through their social and business contacts.

Billy is a seasoned musician and author of several publications which Philippa assisted with, then a trip last year to her home in Nottingham, England inspired her when she visited some friends who were writing songs. She decided she’d give it a go.

Inspiration soon flowed from everything she encountered, from outings around the North West, people she knew and respected, and from stories about events, past and present.

“One of these is a story Billy is researching about a boat called The Rob Roy which sank in a big storm on Lough Swilly in 1894 with three members of family on board. I wrote a song for him based on what he found out.”

This new publication is unique in many ways. It tells stories and it provides you with the sheet music, the lyrics and a CD.

“I’d describe the songs as contemporary folk but apparently you can also detect the traditional Irish musical influences – one tune, for example, is a classic hornpipe for fiddle.”

She doesn’t enjoy performing herself, but hopes others would enjoy the material and have a go at putting their own individual stamp on it. To this end she has placed a Creative Commons License on the work.

This is one of several public copyright licenses that enable the free distribution of an otherwise copyrighted work. A Creative Commons license is used when an author wants to give people the right to share, use, and build upon a work that they have created but protects against using it for commercial or derivative purposes.

“I’m not a performer but I will enjoy hearing anyone else performing the songs. The CD is only an extra that Billy and I recorded to go with the book. I never thought I’d write a book of songs. I played clarinet, bassoon and saxophone in my youth and Mum, Pat played fiddle and Granny Joy the piano but I never thought I’d take my own music any further.”

Philippa is also a great admirer of the oral singing and musical tradition here in Donegal.

“I come from a tradition of reading music so I have the greatest admiration for people who can learn music by ear in the traditional way.”

Perhaps to best understand the types of thing that have influenced her songwriting, one has to look at the title track ‘On Western Shores’. It was inspired following a spur of the moment decision to head to the coast on a dull January afternoon.

“It ended up as a stunningly beautiful sunset stroll along Murvagh beach. With no cameras to capture the moment, writing a song was the ideal solution,” says Philippa.

‘On Western Shores’ is a freestanding A5 spiral bound book where you can flip the pages over and it acts as its own music stand. The cover has been designed by Billy’s niece Nuala Patton and the book itself will be launched this Saturday July 4th at The Book Centre, Main Street, Ballybofey at 4pm.

This will be followed by music and refreshments at the Rosses Bar in Stranorlar from 5.30pm to 7.30pm.

Philippa is also in the process of setting up a website www.thesongstershouse.ie where you can find out more.