THE CRAIC IS STILL ’90’ AT FINN PARK FOR GENTLEMAN BENNY 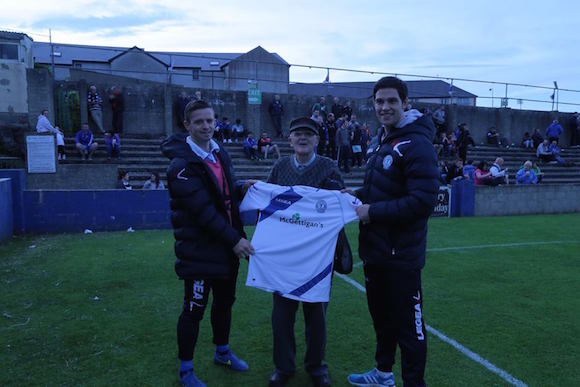 Kevin and Packie present Benny with a Harps jersey to celebrate his 90th birthday. Pic courtesy of Finn Harps.

He has seen many of the greats of Finn Park, from Brendan Bradley to Paul Hegarty.
And he has watched Finn Harps as they reached some memorable and not so memorable milestones over the many seasons he has watched them.
Now Finn Harps fan Benny Gordon has marked his own milestone as he celebrated his 90th birthday recently.
At the most recent home game against Cabinteely, the much-loved and respected Ballybofey man was presented with a Finn Harps jersey by another couple of club legends Kevin McHugh and Packie Mailey.
We’re looking forward to getting a picture of Benny celebrating when Harps gets promoted to the Premier Division at the end of the season.
He’s hoping Benny – and many happy returns!