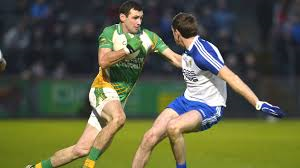 Glenswilly begin their quest for an Ulster SFC title when they travel to Newry this afternoon (2.30pm) to take on Down SFC champions Kilcoo.

It’s their first taste of Ulster SFC action since they heartbreakingly lost the final to Ballinderry in 2013.

Glenswilly enjoyed a sensational run in Ulster that season, but ultimately came up short against the Derry champions in the decider at Healy Park, Omagh.

However, there now back in contention for Ulster honours, after a stunning victory over hot favourites Kilcar in the Donegal SFC final a fortnight ago.

That win has set-up a clash with Down champions Kilcoo – who have won five titles on the bounce in Down, but they’re desperate to make the breakthrough at provincial level.

Glenswilly were inspired by their talisman Michael Murphy in the Donegal SFC, and Kilcoo star Conor Laverty knows how difficult a task getting past the men from Foxhall will be.

Laverty told The Irish News, “We’ve seen DVDs of Glenswilly and we know the task that’s ahead of us,” said Laverty.

“We know they’re very well organised in defence, they set up very well and we know what they have up front – they’ve one of the best forwards in Ireland in Michael Murphy. It’s going to be up to us and our management team to come up with a plan to try and stop him.”

Murphy’s magic means ‘the men from the Glen’ can never be written off and Kilcoo also have to worry about the presence of former Allstar midfielder Neil Gallagher, who can also play at full-forward and offers a lot at set-piece defensive situations as well.

“First of all it was the Scotstown game and since we beat them the full focus has been on Glenswilly. We know it will be a massive challenge for us and we have to be ready for it.”

Alongside Murphy and Neil Gallagher, Gary McFadden is a key player for Michael Canning’s side, and has been one of the best players on the club circuit for a number of years.

However, he has no fears of what Ulster has in store for his side, and is confident they can go on another run like they did in 2013.

McFadden told The Donegal Democrat, ““I remember the first year we won the county title, we played against Cavan Gaels.

“We’d only a week to prepare for that match and with all the celebrating that went on, we just decided to go out and give it a go.

“We managed to win that day, but got beat in the next round. But the next time we got into Ulster, we knew that if we prepared properly and we could give it a rattle. As it turned out we got all the way to the final.”