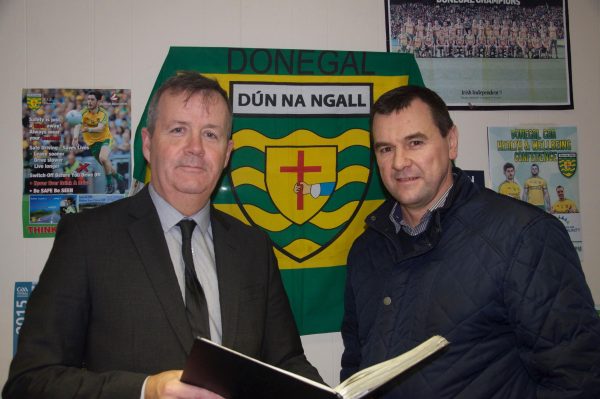 Donegal to face Sligo in challenge game at Coláiste Ailigh

written by Chris McNulty December 2, 2016
Donegal supporters will get a chance to see the Rory Gallagher’s senior football team begin their new season with a challenge match against Sligo next Sunday, December 11th in Coláiste Ailigh, Letterkenny.

Donegal had planned to play Derry at the same venue last December but the match had to be cancelled due to inclement weather conditions.

This match will see Rory Gallagher and his team begin a journey which will hopefully end in Croke Park on the third Sunday in September.

The throw in is at 1.30pm and supporters are advised to come along early.

The photo shows Micheál Ó Giobúin, Príomhoide Choláiste Ailigh and Sean Dunnion, County Board Chairman discussing the arrangements for the game.
While Eamon McGee and Colm McFadden have retired from inter-county football, Gallagher has retained the services of the likes of Karl Lacey and Frank McGlynn with hopes high that Christy Toye, Neil Gallagher and Rory Kavanagh will do likewise.
The Donegal manager has introduced
Donegal to face Sligo in challenge game at Coláiste Ailigh was last modified: December 2nd, 2016 by Chris McNulty
Tags:
Colaiste AilighdonegalletterkennyRory Gallaghersligo