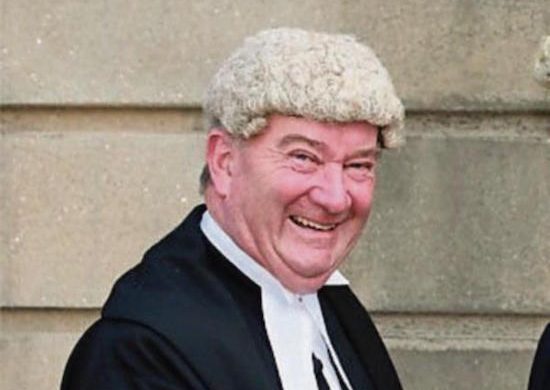 Glowing tributes to Judge who plans to ride his motorbike into retirement on the Wild Atlantic Way!

The judge who has presided over the circuit court in Co Donegal for the past eleven years has promised to return to the county as often as he gets the chance to.

Judge John O’Hagan is sitting at his final court session before he retires from his position.

tributes were paid to Judge O’Hagan, who first came to sit in Donegal in 2006, at this week’s sitting of Letterkenny Circuit Court.

All spoke of Judge O’Hagan’s common sense and fairness as well as his compassion for those who came before him in the courts.

Judge O’Hagan said he had to thank his late father, who was a district court judge, for all the advice he had given him.

He said everyone had worked very hard to reduce the list of indictable cases from about 165 when he arrived to around 50 but that he would still like to see the ‘civil list’ reduced while revealing there were plans in that area.

Judge JOhn D O’Hagan was born in 1947, the third son of the late Judge Desmond O’Hagan, a member of the District Court bench.

He was educated at the Boher National School, Cooley, Co Louth, Clongowes Wood College, UCD and the Kings Inn.

He was appointed a Judge of the Special Criminal Court in 1999 and presided over many high profile trials with his High Court and District Court colleagues. He also sat as an unassigned Judge across the country up until 2006.

In July, 206, he was assigned as Circuit Court Judge for the Northern Circuit covering counties Donegal, Leitrim, Cavan and Monaghan. In 2015 he was appointed the temporary Military Judge and presided over a number of Courts-Martial before the appointment of Col Michael Campion as the permanent Military Judge.

Judge O’Hagan had many interests. he joined ‘D’ Coy 20th Batt (An Phiarsaigh), an FCA unit in 1963 and was attached to Griffith Barracks. He was commissioned into that unit in 1972 and served with them until 1977 when he was transferred to the 2nd Field Military Police serving in Collins and Clancy Barracks.

He is a keen motorbiker and golfer, sailor and fisherman. He is also a keen caravanner with France being his favourite destination.

He and his wife Sarah live in Co Meath and have three grown-up children, two of whom are lawyers. They are fourth generation lawyers with their great grandfather PJ O’Hagan starting the solicitors’ firm of Donal O’Hagan and Co in Dundalk.

Judge O’Hagan and his wife have two grandchildren.

Glowing tributes to Judge who plans to ride his motorbike into retirement on the Wild Atlantic Way! was last modified: June 15th, 2017 by Stephen Maguire
FacebookTweetLinkedInPrint
Tags:
donegalJUdge John O'Haganretirement