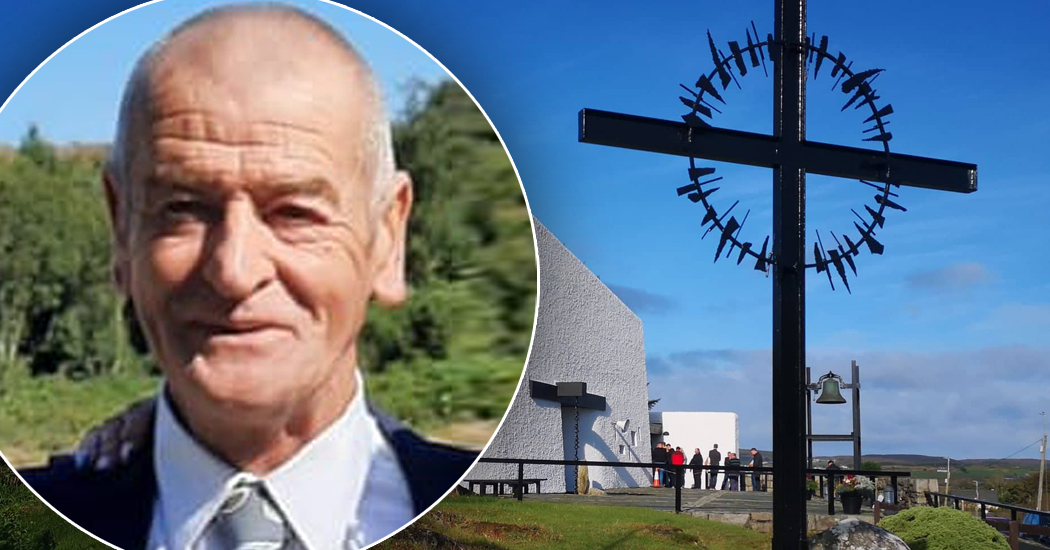 Hugh Kelly, a content man who enjoyed life, was celebrating going into cancer remission just weeks before the Creeslough tragedy.

Hugh’s journey with illness was recounted at his funeral Mass this morning in St. Michael’s Church Creeslough.

The 59-year-old had received good news about his cancer treatment just three weeks before he perished in the fatal explosion on Friday last.

The local farmer had been undergoing treatment in Galway in recent years, enduring many “close scrapes” before getting the happy news from a check-up last month.

His partner Linda, her daughter Mary, Hugh’s sisters Agnes and Tessie and brother Frank were all celebrating this good news with him before the tragic events of last week.

Parish Priest Fr John Joe Duffy recalled stories of happier times in Hugh’s life today, honouring the love he had for his family and the love they had for him.

Hugh showed affection for those around him through acts of kindness and this was symbolised in the offertory gifts.

A handmade jewellery box was presented in recognition of Hugh’s ability to make and mend things. He was a perfectionist who fixed many things for family and friends, Fr Duffy said.

Another gift was a picture of Hugh with Rosey, the granddaughter of his partner Linda, who he cherished like his own granddaughter.

A pot of blackberry jam symbolised Hugh’s patience, dedication and kindness he showed by spending hours picking berries to make jam to share with others.

A second photo showed Hugh smiling in a cornfield.

“A man who enjoyed a good time, a happy man with a cheeky grin, who the family knew and loved so well,” Fr Duffy said.

Born in 1962, Hugh was the youngest of five children. His childhood was spent at Doe Castle, by the shore and in the fields.

He was a man whose smile would brighten up any room and his skills were appreciated by all who he helped.

Fr Duffy said: “Hugh could always be relied upon for turning his hand to any job, whether it was replacing a skirting board or hanging a shelf or a picture, he always gave it 100%, taking the time to get it right and making sure he got it perfect and of course nobody could do it like Hughie.”

As the sun shone over Creeslough this morning, it also shone on a wall built by Hugh at the back of the church car park. It is said that Hugh placed his initials on his work there.

Fr Duffy said his family will cherish the practical gifts he leaves behind, such as a cradle and doll for his nieces and the fairy doors in his sister’s garden.

Hugh also showed kindness to animals, and he often had a dog who “found him”, rather than he going out to find a dog.

Family and friends, community members, officials and emergency service members gathered in large numbers once again to give thanks for the life of Hugh and to pray for all the victims of the fatal events of Friday 7th October.

Fr Duffy took the opportunity at today’s service to call on the Creeslough community to seek support during this time of shock and grief.

“It is almost a week since the tragedy that took the lives of ten of our friends, loved ones from this community and other communities and we are still are the point where we are holding funeral masses,” Fr Duffy said.

“Many families are naturally in shock, numb and we really don’t know what we are feeling, there is still that pall of silence, that grieving and mourning that heartbreak is visible to others who enter into the homes to try and offer consolidation and comfort families coming to meet one another

“The vibrations of prayers, goodwill and wishes are what is carrying us in this difficult journey that we all are undertaking

“We need the continued embrace of this country and prayers and the professional supports so available to us.”

President Michael D Higgins was among the mourners at this morning’s mass, alongside Senior aide-de-camp Colonel Stephen Howard, aide-de-camp to An Taoiseach Micheal Martin, Commandant Claire Mortimer. Again Donegal Minister Charlie McConalogue was present representing the government, and many other public representatives, Cllr Anthony Molloy representing Donegal County Council with Chief Executive John McLaughlin alongside representatives of An Garda Siochana and emergency and rescue services and healthcare staff from the Republic and Northern Ireland.

May He Rest in Peace