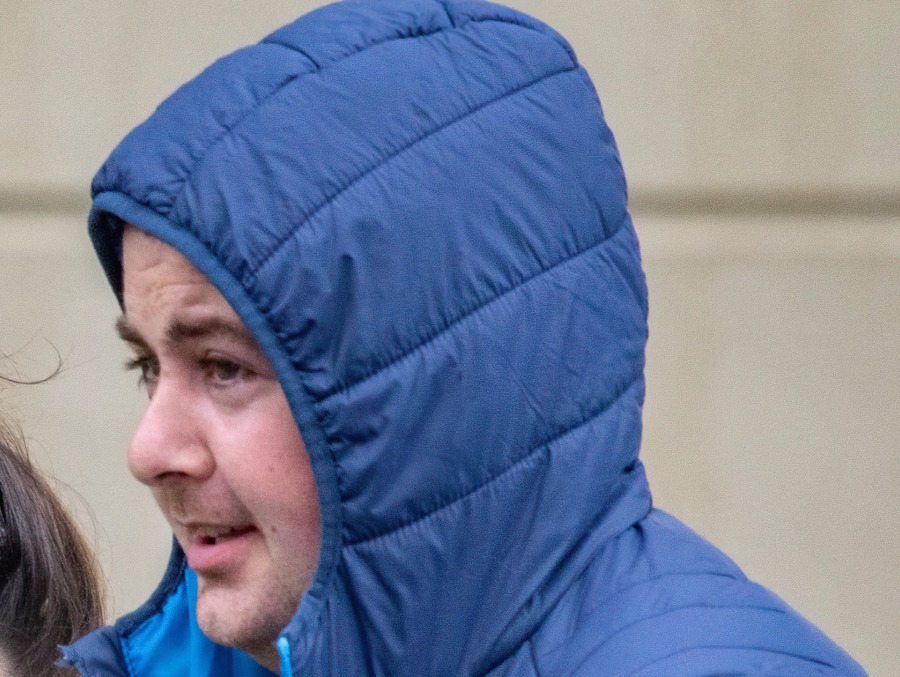 A Falcarragh man who broke into his ex-girlfriend’s flat and battered her new boyfriend as the couple slept has avoided jail after paying his victims €10,000.

Daniel Ferry broke into his ex-girlfriend’s flat and in a fit of rage battered her new boyfriend as the couple slept.

Ferry, of Shroughan, Falcarragh, left a bloodbath at the home of Kerrie McFadden after the invasion on August 7th, 2020.

He battered Barry McGinley so badly that his nose and lips turned black with bruising.

The 26-year-old accused man appeared at Letterkenny Circuit Court and was given sentences totalling five years and two months.

However, he was given a chance to avoid spending time behind bars as the sentences will be suspended if he comes up with a total sum of €10,000 for his victims and signs up to attend counselling.

Mr McGinley woke up at 7.50am with a man straddling him and punching him on the face.

He was able to identify his attacker as Ferry, the ex-boyfriend of Ms McFadden.

Garda Martin Gallagher told the court that when he went to Letterkenny University Hospital to meet with Mr McGinley, he noticed the right-hand side of Mr McGinley’s face was completely swollen, from his right eye to his jawline. His lips and nose were beginning to turn black with bruising.

The court heard that Ferry had initiated a break-up with Ms McFadden, with whom he had been in a relationship for six years, and there had seemed to be no animosity.

Garda Gallagher said Ferry sent a snapchat message to a group of friends saying: “Not nice to find your partner of six years in bed with another man. Let’s hope his head is as sore as my knuckles”.

Counsel for the State, Ms Patricia McLaughlin BL, said Ferry had sent Ms McFadden several text messages, attended at her house and had followed her and Mr McGinley in the car.

“He was calling her persistently and he arrived at her driveway,” Ms McLaughlin said.

Ms McFadden said in a victim impact statement that her house had been left ‘like a bloodbath’ and she had to replace furniture. Cleaners were required to clean up the room.

“All I am left with is the place that he thought he had a right to violate,” Ms McFadden said. “His actions have taken my home away.”

In the victim impact statement, read into the court record by Ms Patricia McLaughlin BL, counsel for the State, Ms McFadden said her life had changed ‘in every way’ since the incident.

“I was the most independent person I know, but I moved out of the house and I was a 24-year-old who needed someone to stay with them due to nightmares and I sleep with the lights on,” she said in her statement.

“My nightly routine is now checking locks. His violation of my home and the stalking has taken away my independence and my trust in people. I can’t let anyone close to me.”

Ms McFadden has since left a management position in a job she loved to live in the United Arab Emirates.

“I couldn’t see any other way out,” she said. “The decision did not come lightly. My confidence was completely knocked. I have had to restart my whole life. The thought of living in Falcarragh any more is daunting.”

Ms McFadden remembered attending a concert and how Ferry ‘stood behind us all night’.
“Repeated actions such as this was very intimidating,” she said, adding how she could not post her location on social media like her peers. “I was doing everything to keep my location private.”

In his victim impact statement, Mr McGinley said he felt ‘so fortunate to be still alive and conscious’ after the attack. “I felt so vulnerable and I felt defenceless,” he said. “There was nothing I could do and it intimidated me a lot.

“When the doctors told me that my skull may be fractured and my nose broke, it dawned on me how things could have changed and it was scary.”

Mr McGinley required surgery on his nose and he told how cracked and chipped teeth had made him ‘so conscious’ of his appearance.

Ms Fiona Maguire BL, for Ferry, said her client had €2,000 by way of compensation in court and a further €8,000 would be made available ‘to offer as some form of apology and restitution’.

“Mr Ferry couldn’t cope when Ms McFadden began dating Mr McGinley,” Ms Maguire said. “He struggled to come to terms with it. She was his life as he had known it. He took his emotion and the subject of his anger and hurt out on Mr McGinley.”

Judge John Aylmer said his starting point for sentencing Ferry was four years imprisonment for the burglary, three years in prison for assault causing harm and 12 months for harassment.

“He was in the throes of a jealous rage,” Judge Aylmer said.

There was, Judge Aylmer noted, ‘significant mitigation’ to be considered. Ferry was ‘entirely co-operative ‘ with Gardaí and showed a remorseful attitude, he said.

“This is a man who, but for a once-off jealous rage, wouldn’t be before the court in relation to serious criminal offences,” Judge Aylmer said.

Judge Aylmer reduced the sentences to two-and-a-half years imprisonment for burglary, a two-year prison term for assault and eight months in prison for harassment, with the sentences to run concurrently.

Should Ferry, who was deemed as a ‘low risk’ of reoffending, come up with a further €8,000 and sign up for a counselling programme, Judge Aylmer said he would suspend the sentences in their entirety, upon Ferry entering into a bond to keep the peace for two years.

Ferry appeared again at Letterkenny Circuit Court this week and the court was told the compensation had been made available.

Barrister Ms Maguire also told the court that her client had yet to complete the anger management course  because of staff shortages but had committed to the course.