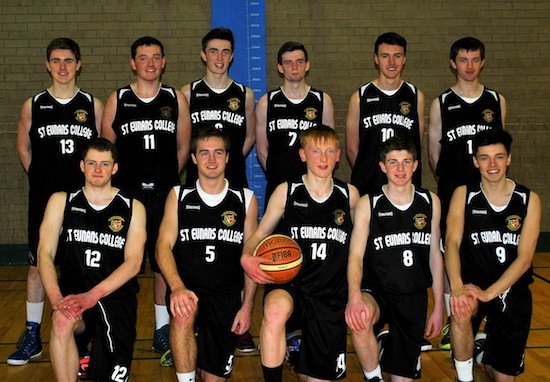 St Eunan’s College senior basketball team have booked their place in the Schools All-Ireland Final of the U19A Cup, the most coveted prize in schools basketball at the highest level.

They met St Paul’s College, Raheny yesterday in St Malachy’s College in Belfast in what was a thrilling semi final.

Both teams started the game with a high tempo with St Eunans getting the better of the early exchanges. Five players contributed with scores and Eunans led by two at the end of the first quarter on a score of 16 – 14.

This was always going to be a tough competitive game and St Pauls came out strongly at the start of the 2nd with a full court press. This unsettled the St Eunans team resulting in a number of turnovers.

St Pauls took advantage of these and with 3 minutes left in the quarter they had opened up a ten point lead. The St Eunans bench called a time out at this stage and when play resumed they added four baskets without reply from St Pauls leaving the score 31 -29 at halftime.

St Eunans dominated the 3rd quarter putting up 28 points against 13 from St Pauls. However in the fourth quarter St Pauls scored 28 points against 15 from St Eunans including a basket on the buzzer which resulted in the game going to extra time on a score of 72 – 72.

St Eunans remained the more composed team in the extra period and edged out the game on a final score of 78 – 75.

The final is due to take place the week beginning Jan 19th in the National Basketball Arena, Tallaght.