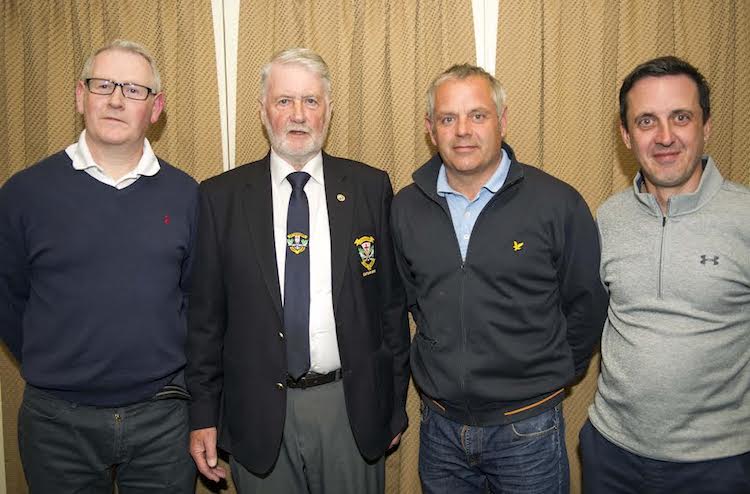 There was a big turnout for the Signal Signs Open last Wednesday at Letterkenny Golf Club.

Hector McIlwaine (16.4) won this competition with an excellent score of 40 points.

Hector got a birdie on the 8th and 5 pars in his round of golf. His handicap has come tumbling down since starting to play this year.  Kevin Kiely (7.7) was a close second with 38 points. and Kenny King (7.5) got third place with 36 points.

Letterkenny Golf Club Classic was played off on Saturday 5th May.

The was a very large turnout i.e. 50 teams in all.  The winners were Greg Sullivan, Tom Reddin, Joe Blake, Adrian Daly – 93 points.

The Longest Drive (18th) went to Peter Muldoon and for the ladies went to Anne McGrath.  It was a very successful Classic and was enjoyed by all.

Many thanks to all those who took part in this competition and to the Sponsors Brown’s on the Green.

The members competition on Sunday was won by Oisin Harkin (18.9) with 40 points.

Oisin has been showing great form this year and took 7 pars out of the course on Sunday.  Tommy Greally (18.0) who has been consistently showing good form came in a close 2nd with 39 points (bot) and Michael McHugh (17.7) got 3rd place with 39 points. Kevin Rafferty took Gross with 37 points.

The Jimmy Bruen qualifier was played off between 12 teams at Portsalon on Sunday.

Charlie Coughlan took his team of 10 players to Portsalon and got an excellent result by qualifying in fourth place on the day.

The conditions on the front nine were very tough.

Charlie wishes to thank the large panel of players who consistently turned out for practice matches and hopes to keep this panel together for the remainder of the competition. The result on Sunday is due to having this excellent panel of players to choose from.  The next match is against Portsalon in Rosapenna.

Well done to Josef on coming 2nd place as it is his first time to feature.  Welcome back to John Buchannan and get well soon to Jackie Duffy who will soon be back on the fairways .

Upcoming events – on Wednesday 9th May we have the Radisson Blu Letterkenny Open and on Saturday 12th May St. Eunan’s Club Classic.