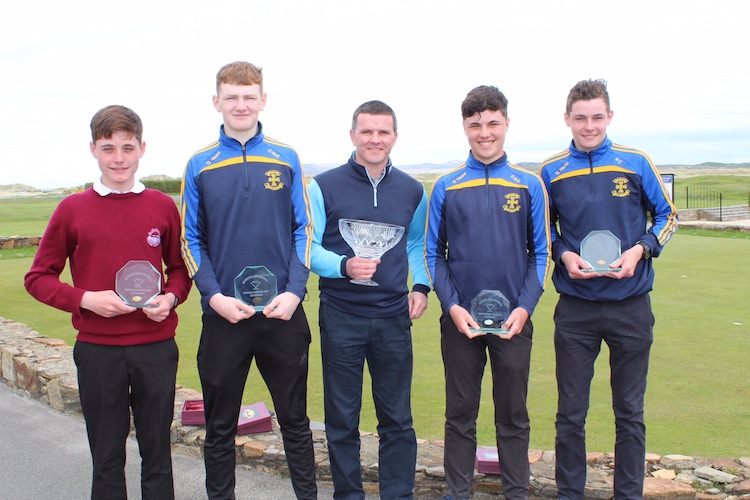 Pat Swaine, the director of Derryveragh Crystal, has sponsored the event now for 28 years and all the schools, teachers and students would like to acknowledge his great support.

Dunfanaghy Golf Club have also hosted the Final on so many times and the condition of the course was great with the hospitality in the Clubhouse made it a great day for all.

On the playing field it was the Carn boys led by DJ McGeoghan off 7 handicap who scored a solid 37 points to set the boys on their way. He was backed up by Ryan Collins (15) on 35 points, Martin O’Connor (15), 35 points and Oisin McGonigle (11) 34 points. The team finished on 141 points.

The individual section was won by Ciaran Bradley (Scoil Mhuire, Buncrana) with a great score of 38 points, playing off 3 handicap winning on a break of tie over Thomas McMenamin (10) (St. Columba’s College, Stranorlar) 38 points.

Other Schools who played in the Final were: Pobailscoil Ghaothdobhair, St. Eunan’s College, Abbey V.S., Scoil Mhuire, Rosses C.S., Milford Community School and Crana College also performed to a high standard but were just outside the winners.