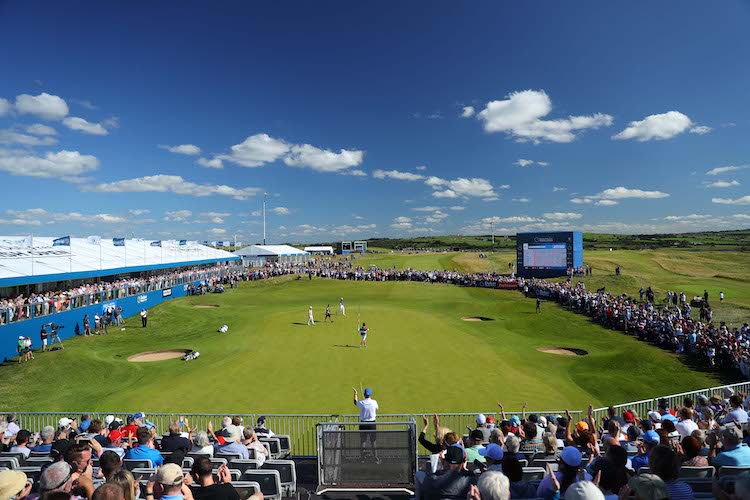 Sunday tickets for the 18th grandstand at the 2018 Dubai Duty Free Irish Open hosted by the Rory Foundation have sold out completely, and fans hoping to get exclusive front-row seats for the prestigious Rolex Series event are now being urged to act quickly with limited tickets remaining.

With the famously passionate Donegal sports fans gearing up for one of the biggest events Ireland’s northernmost county has ever seen, general ticket sales are well ahead of target for the fourth Rolex Series event of the European Tour’s Race to Dubai.

Benjamin Hebert of France celebrates holing a putt on the 18th green during day three of the Dubai Duty Free Irish Open at Portstewart Golf Club on July 8, 2017

Added to that, the promise of spectacular scenery and world-class golf has led to grandstand tickets for championship Sunday selling out, but golf fans looking to get the best seats in the house to watch the game’s elite players still have the opportunity do so for the first three tournament days.

General and grandstand tickets for the Dubai Duty Free Irish Open – where World Number Four Jon Rahm will defend his title and host Rory McIlroy will attempt to claim his home title for a second time – are available at www.europeantour.com/tickets.

The island of Ireland’s national Open will visit County Donegal for the first time from July 5-8, and a host of star names have confirmed that they will tee it up on Ireland’s picturesque coastline.

Rahm will return having lifted the trophy courtesy of an incredible final round of 65 last year – a score which secured him a record-breaking six-shot triumph with a 24 under par total, also a tournament record.

More big names are set to be announced for the fourth tournament of the 2018 Rolex Series, a premium collection of eight events which offer a minimum prize fund of $7,000,000.

“This event is always one of the most eagerly-anticipated on the Irish sporting calendar with incredible support year-on-year, and for this summer’s tournament we are guaranteed to have an amazing atmosphere given the passion of sports fans in County Donegal.
“We are expecting another high-quality Rolex Series field to descend upon Ballyliffin next month, and we have some exciting announcements in store in the coming weeks. Those attending can also expect outstanding food and entertainment – including the Glashedy Sessions music event which will be headlined by Irish favourite Nathan Carter.

“We are all set for what promises to be a memorable week so we encourage Irish sports fans to snap up their tickets ahead of the summer rush and be at Ballyliffin!”

Tickets for the Dubai Duty Free Irish Open hosted by the Rory Foundation are on sale at www.europeantour.com/tickets and begin at €20 for Pro-Am Wednesday, with tickets for Thursday and Friday costing €32 and day tickets for the weekend costing €34 each.

An adult season souvenir ticket, which covers five days of world class golf from Wednesday to Sunday, costs just €110. Concessions are available for customers aged over 60 and between 14 and 17, while children up to 13 are permitted free entry when accompanied by a ticket holding adult.