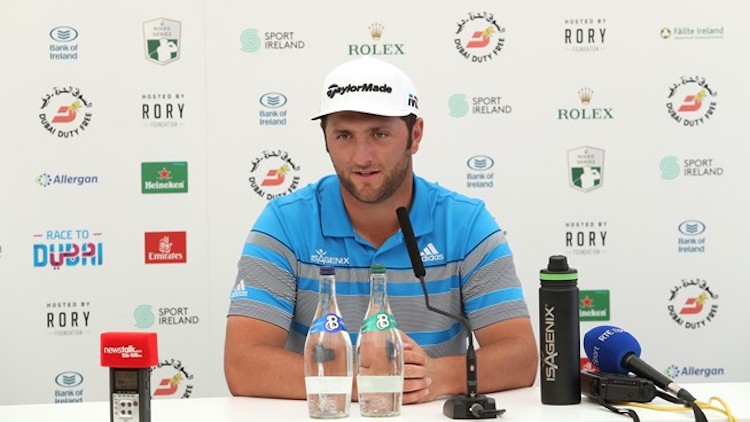 Rahm has been a popular figure since touching down in Ballyliffin Golf Club, where he hopes to defend his title on the Glashedy Links.

“To come back and get the same recognition, it’s absolutely amazing,” Rahm said.

“Everywhere I go around here, a lot of people tell me they hope I defend my title again.

“I would probably expect everybody to think Rory or Graeme or Shane or somebody who is actually from Ireland to win but to get the same recognition is absolutely special.

“I don’t know if it’s Spanish players, or just me and my character that really connects with the Irish people but it’s amazing to be a champion and to be an Irish champion.

“To come back, and the respect I’ve gotten, it’s absolutely mind-blowing. If it’s not better, it’s equivalent to how well I get treated in Spain, and that’s hard to do, because Spanish players are cherished. It’s hard to be a great player coming out of Spain.”

Ballyliffin is playing host to the tournament for the first time and Rahm has been impressed.

Having played in the Pro-Am today, Rahm was particularly taken by the par 3 seventh – Loch na nDeor – and the par 3 14th – Camus.

He said: “I think it’s an outstanding golf course. I know the weather is not what is usually going to happen out here but it’s beautiful.

I think it’s one of the most beautiful golf courses I’ve ever played, truly. It’s absolutely stunning. The views from the 14th tee and the 7th tee are probably some of the prettiest sights you’ll get in golf.

“To me it doesn’t get anymore like golf than a pretty view on a links golf course to be honest. It’s really beautiful.

“It’s a tough test and not the easiest golf course. Last year we had a very similar golf course where it was a little more wet and slower and windier and rain, and had a good week and I can shoot some low scores.

“But out here with how firm it is, even if we get no wind, it’s going to be tough to be shooting low. Hopefully we’ll get some wind and the course will show how tough it can actually play.”