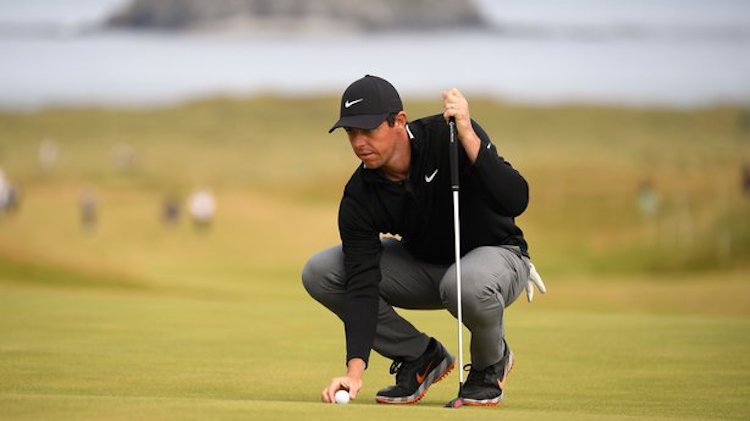 Rory McIlroy admits that the Glashedy Links have tested his patience after a second round 73 today in Ballyliffin.

McIlroy carded a one over par round, but the Northern Irishman, the world number eight, made the cut to make it into the final two days of the 2018 Dubai Duty Free Irish Open.

Teeing off from the tenth, McIlroy parred six in a row, but landed in a bunker on the 16th. On the par-five fourth, McIlroy missed a putt from 12 yards and he bogeyed the ninth.

“I didn’t play maybe quite as well as yesterday but I still had chances to make birdies,” McIlroy said.

“You know, I bogeyed three of the last five or something like that, which isn’t great, but yeah, I played okay again.

“I hit a couple of loose tee shots coming in and cost me a couple of bogeys later on. The game felt okay. Didn’t hole anything again on the greens but hopefully I can turn that around over the weekend.

“Just two poor tee shots on the last two holes and just put myself out of position.

“It was hard to make par from there. Felt like I hit the ball okay again today. It’s definitely going in the right direction.

“Didn’t hole anything, really, again. Held a nice one for birdie on 6 but that was really it. I finished out okay. Going to have to hit it closer and hole a few over the weekend if I want to have a chance.

“If you see a few drop, you can get some confidence and be a bit more confident in your reads. I’ll just keep plugging myself away and giving myself opportunities and hopefully they will fall on the weekend.”

McIlroy is seven shots behind leaders Erik Van Rooyen, Matthieu Pavon and Ryan Fox, all on eight under.

Padraig Harrington missed the cut, however. Harrington was at four under from Thursday, but he finished with a six-over-par 78, not enough to make the cut.

McIlroy says the course is proving a big test for the players.

“You have to think about where you’re landing your golf ball and what you’re hitting off tees and even giving yourself angles into some of these tight hole locations.

“It tested my patience obviously. Mumbling a bit from myself going from the 18th green to the first tee after that putt. One of those things. I’m here for the weekend and at least give myself an opportunity to go out tomorrow and shoot a low one.”