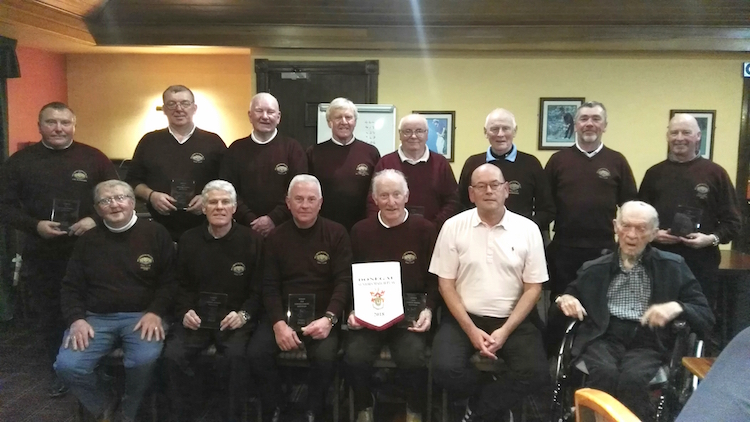 Team Captain Michael Hynes was delighted with his team’s performance and thanked them all for their dedication.

He also thanked Rosapenna and their Team Captain for the manner in which this encounter was played.

At the presentation afterwards in the Club house, Vice Captain Seán Carlin stated his delight for the club’s success this year and his personal satisfaction for being selected for two winning teams before Club President Mr Joe Blee said a few words.

The DCGC Convenor for the Senior Match play Teams Peter Dobson (Letterkenny GC) was called upon to make the presentation to the winning team.

Not a great day was forecast for Tuesday but they got that one wrong and our Captain Mr Gerry Driver had no complaints as he took  full advantage and top prize on the day. Well done Mr Captain.

B&S Darts team took an other knock on Thursday last with a 6/3 defeat to Cheers Bar. A lot of our matches are probably closer that what the final score would suggest

What a great idea it would be to give a loved one a years membership of Ballybofey and Stranorlar Golf Club for a Christmas Present. Call into our shop and find out more.

It is important at this time of year to repair your pitchmarks on the Green and replace divots to the fairways. Thank you.

Fairway MATS may be brought into use soon so keep an eye on Ballybofey and Stranorlar Golf Club (Official) fb page.and have your mat at the ready.