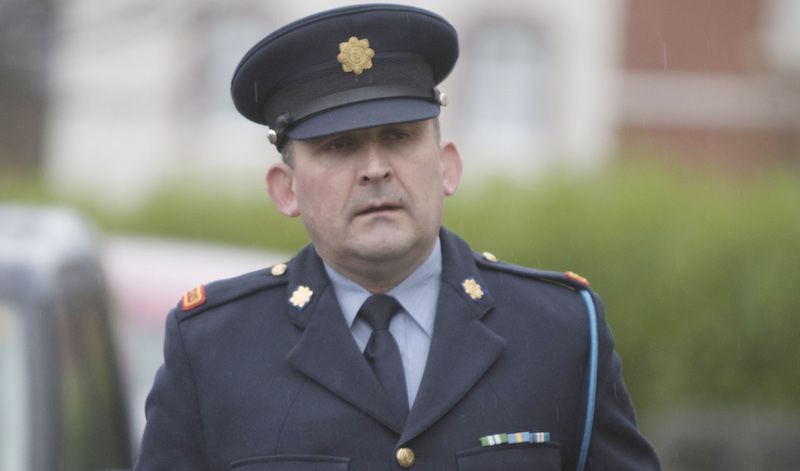 Judge Paul Kelly has led tributes to Garda Inspector David Murphy who retired from An Garda Siochana at the weekend.

Inspector Murphy, a native of Sligo, has spent the last 30 years serving the people of Inishowen and Donegal.

District Court Judge Kelly revealed Inspector Murphy was the first Garda he met when he arrived in this District nine years ago.

He recalled “At that time he was based in Letterkenny and welcomed me to the District on behalf of the Gardaí. He was gracious and welcoming in his speech, and assured me of his cooperation in my new assignment.

“For most of the following eight years he appeared regularly in the Courts, first in Letterkenny, and then in Buncrana and Carndonagh, where he was the “public face” of the Prosecution in those courts.

“He was always a pleasure to work with – meticulously prepared, scrupulously fair, and with the touch of humanity and compassion without which the District Court would be merely a court of law, rather than one of justice.”

Judge Kelly said Inspector Murphy exemplified that body of men and women who perform a very under-appreciated but vital role in the administration of justice in our community : the Garda inspectors and court presenters.

He continued “Every day they carry an enormous workload, and pit their wits against barristers and solicitors with great skill, professionalism and dedication. David Murphy was a robust but fair competitor and never played the man instead of the ball.”

He added that Inspector Kelly is very unlucky to have to retire at a such a young age, and with so much more to give.

He continued “I am very sorry that he will not be standing up in front of me any more, to present the facts of a case, or to cross-examine a witness, or respond to legal submissions – all things he did without fuss or rancour.

“He will be a huge loss to the Gardaí, the courts and the community in Inishowen. Our loss will however, be his family’s gain, and I wish him many years of good health to enjoy with them. I hope his many talents will find another outlet which can benefit the community.”

Inspector Murphy arrived Buncrana as a young Garda in 1990 serving afterwards in Moville and Burnfoot before being sent in 2001 to an Bun Beag on promotion to Sergeant and later navigating his way back to Moville and Buncrana again.

He was promoted to Inspector in 2007 spending three and a half years in Letterkenny before returning to Buncrana.

Married to Caroline, the couple have three children Ciara, Orlaith and Cian.

“David is a fellow Sligo man and I wish him the very best in his retirement. He is a good guy,” he said.

Former Letterkenny Inspector Goretti Sheridan, now promoted to the rank of Superintendent and based in Castlerea in Roscommon said Inspector Murphy was a pleasure to work with.

Sgt Paul Wallace, National Executive Member of the Garda Connaught Ulster Region said he too would like to be associated with the tributes to Inspector Murphy.

He said “On behalf of Association of Garda Sergeants and Inspectors of the Donegal branch I would like to wish inspector David Murphy of Buncrana Garda Station the best of luck as he heads towards retirement after a rewarding career.

“David was always interested in the welfare and working conditions in An Garda Siochana. David his wife and family are wished good health and happiness to enjoy the next phase of their lives.”

Garda Brendan O’Connor of the Garda Representative Association (GRA) in Donegal paid tribute to Inspector Murphy on behalf of the Garda rank in Donegal.

“On behalf of the members of Garda rank, I thank Inspector Murphy for the help, assistance and guidance he has provided over the years.

“He was always polite, courteous and pleasant in how he approached his role, something which was much appreciated. We wish him a long and happy retirement.”

Members of the Bar and court service are due to pay tribute to Inspector Murphy at today’s sitting of Letterkenny District Court.

“He never played the man instead of the ball” – Tributes to retiring Garda Inspector was last modified: May 26th, 2020 by Staff Writer
Tags:
buncranadonegalGardaInspector David MurphyJudge Paul Kellyretirement