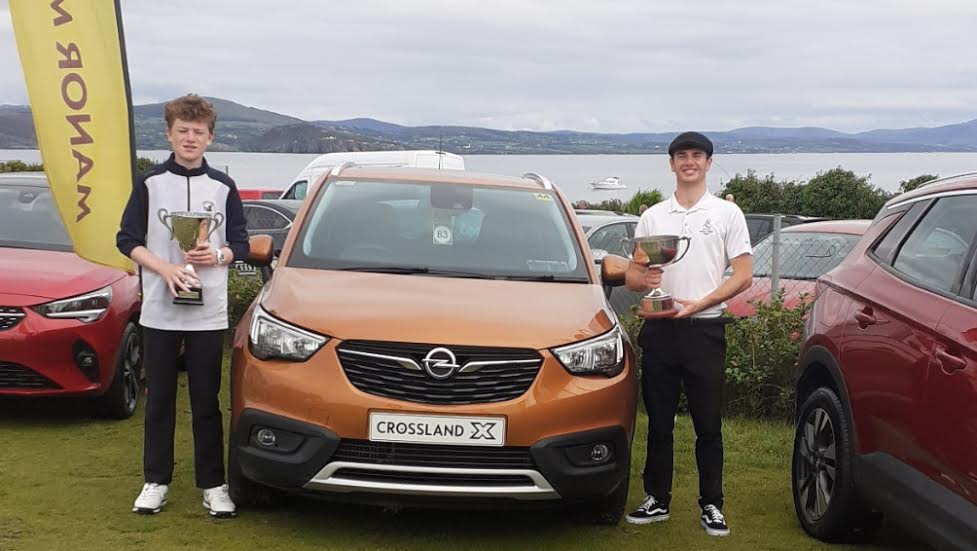 The one-handicapper made light of testing conditions on the Fanad Links to raise the trophy and take first prize in the Manor Motors Opel-sponsored event.

After a brace of opening pars, Cian launched his challenge with successive birdies on the third and fourth holes. With breezy conditions, the always challenging front nine at Portsalon took a bite back and a run of three fives to the turn meant he was level-par at the halfway stage.

A further bogey at the par-three tenth might have derailed a player with less confidence in the job at hand, but Cian quickly responded with a birdie on the par-four 11th under the foothills of Knockalla and that proved the catalyst for a very strong finish. A succession of pars was interrupted only for a fourth and final birdie of the day on the par-five 17th hole and a closing tally of 71 blows.

Ultimately that was more than enough to take the win, coming home four shots clear of the runner-up, Ballyliffin’s Kealan Quigg (+2) on a score of 75. The leaderboard was rounded off by Sean Hensey (7) in third spot with a 76, while Conor Connolly (5) took fourth spot overall with a 78. The nett win in the Senior Scratch Cup went to Damian Toland (7) with a 72-nett return.

In the Intermediate Scratch Cup it was another step towards single-figure golf for teenager Ciaran McCormick (11) as his round of 79 grabbed a one-shot win over Justin Green (11).

Ciaran had to deal with an early setback on the third via a double-bogey six but he bounced back in considerable style with an immediate birdie at the fourth. A steady back-nine that brought six pars and three bogeys was just enough to edge the result for this promising young golfer.

Justin’s tally of 80 held off Pat Bonnar (13) to take next best, though the Letterkenny man will have fond memories of the day, having struck a hole-in-one on the par-three 12th en route to finishing third.

Padraig McAteer (15) took fourth spot in the Intermediate section with a score of 82, while Stuart Nicholl (16) took the nett prize with a 70-nett score.

A hugely successful Scratch Cup to make the end of what has been a very different golfing summer at Portsalon and all across Ireland under the Covid-19 golf restrictions. Portsalon GC are grateful to Manor Motors Opel, Letterkenny for their generous and engaging sponsorship of this event and look forward to developing the partnership in years to come. Thanks to our winners for re-appearing on Sunday afternoon for presentations and prize giving.

Deferred from March, the Portsalon Ladies Winter Links Captains Day was held on Thursday last. With over 73 ladies taking part and despite the inclement weather, the scoring was very close with a break of tie determining most of the prize winners. Eileen Reilly(17) from Ballybofey & Stranorlar with 38pts held off Margaret Crossan (19), also from B&S, to win the Captains Prize on a break of tie.

Book before you play (timesheet is available to book one week in advance). Follow Club protocols before, during and after your game.