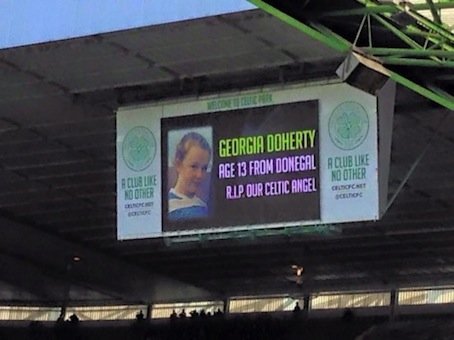 The 13-year-old from Inishowen tragically died in a car crash outside Derry last Sunday afternoon.

Georgia, from Redcastle, was a huge football fan and supported Celtic and Liverpool.

Many at her funeral in Drung on Thursday wore football jerseys in honour of the sports-mad youngster who played soccer and GAA.

The Liverpool and Celtic anthem ‘You’ll Never Walk Alone’ was played at her funeral.

Meanwhile the PSNI in Derry are still appealing for information from anyone who may have witnessed last Sundays crash to contact them.

Tragic Georgia’s sister Lisa, who was driving the car, is still in a serious condition in Altnagelvin Hospital in Derry.