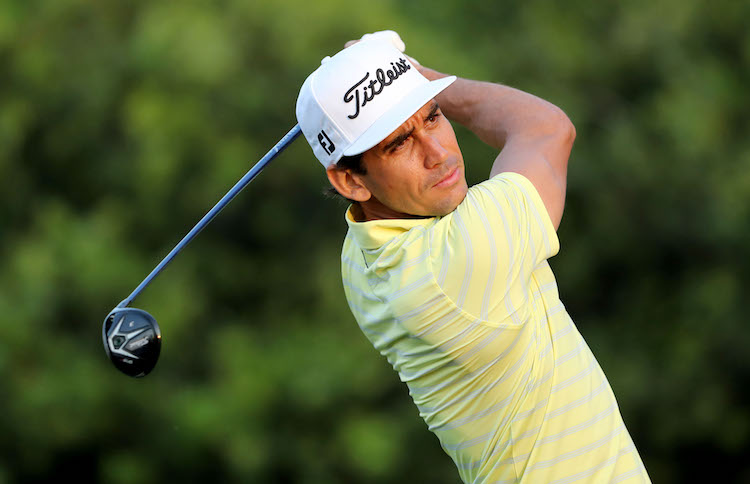 Some more of the world’s top golfers have confirmed that they will be competing at the Dubai Duty Free Irish Open in Ballyliffin in July.

Picture caption: Rafa Cabrera Bello of Spain plays his tee shot on the par 4, 10th hole during the second round of the The Players Championship on the Stadium Course at TPC Sawgrass on May 11, 2018 in Ponte Vedra Beach, Florida. (Photo by David Cannon/Getty Images)

World Number 24 Cabrera Bello already has one Rolex Series title to his name, having won last year’s Aberdeen Asset Management Scottish Open, and the 33 year old has a strong record on Irish soil having come close to victory in 2012 when he claimed a share of second place at Royal Portrush Golf Club.

The Canary Islands native, who also has two other top fives and an additional top ten to his name in the island of Ireland’s national Open, will be looking to make it two Spanish victories in successive years, where fellow countryman and World Number Four Rahm will defend the prestigious title at Ballyliffin Golf Club, from July 5-8.

As one of the European Tour’s eight Rolex Series events, the Dubai Duty Free Irish Open will carry extra Ryder Cup points for those players hoping to earn a place in Thomas Bjørn’s team for Le Golf National in September.

Following his impressive debut performance at Hazeltine National in 2016, Cabrera Bello will be hoping for a big summer if he is to have a chance of playing in Paris in four months’ time.

“I am really looking forward to returning to the Dubai Duty Free Irish Open and playing in front of the Irish crowds again,” said Cabrera Bello. “It is a tournament which has been very good to me through the years and I love links golf.

“I have never played Ballyliffin but it looks like we are in for a treat in Donegal. I have had some good results on the European Tour this season so far, but I know I can play well and win on links courses so I’m confident of making that count and hopefully contending for the title in Ireland.”

Fitzpatrick, who has one top ten to his name at the Dubai Duty Free Irish Open, said: “I love playing in Ireland and I’m a huge fan of links golf so I’m looking forward to returning to the Dubai Duty Free Irish Open again. The fans are always extremely knowledgeable and supportive and that’s one of the main reasons why I love playing that event every year.”

Three-time European Tour winner Wood said: “I’ve got a pretty good record at the Dubai Duty Free Irish Open so I’m looking forward to returning this year. Unfortunately I missed the event last year, but the links golf combined with the big Irish crowds always makes it a special event on the calendar and it should be a great week at Ballyliffin.”

Willett, the 2016 Masters Champion, said: “I’m really looking forward to playing at Ballyliffin this year. I’ve managed to play pretty well at the Dubai Duty Free Irish Open, although I was forced to retire last year due to the injury I was struggling with at the time. I’m now working hard on getting my game back to where it should be and hopefully I can hit some form at the right time in the summer.”

For any of the Spanish or English stars to get their hands on the coveted Dubai Duty Free Irish Open trophy, they will of course have to contend with a very strong Irish contingent which includes stars like tournament host Rory McIlroy, Padraig Harrington, Graeme McDowell, Shane Lowry and Paul Dunne.