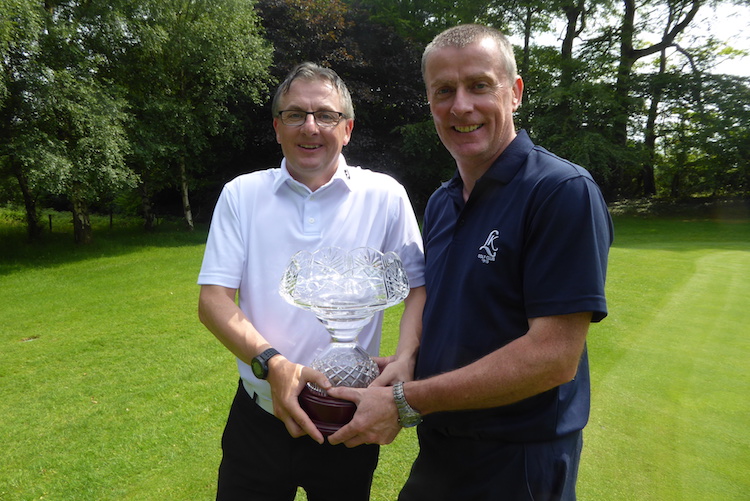 Greg Cullen was the main sponsor and made his annual trip from Germany and was awarded with a great day with many prizes.

Victory on the day went to Chris Nee on 41 points followed by his brother PJ Nee on 39 points. Chris had a solid round of golf with 20 points on the front nine and 21 points on the second nine.

Pj came close and was unlucky at the 5th, however his birdie at the 18th made a close finish.

In 3rd place Adrian Daly made his presence felt also 39 points with his birdie at the 13th hole was one of his highlights as he gave it a good run.

In 4th place was Liam Sweeney on 38 points. Liam was 2 over par after 9 holes setting up strong challenge.

Michael McGrath, who was a member of the St. Eunan’s College teams from 1990 – 96 and played in all Alumni competitions, was remembered on the day and the winner of the Memorial Trophy was Mark McNulty.

In the Ladies section it was Triona Daly taking 1st with a score of 33 points followed by Eileen Daly also 33 points and Kay Kelly was in 3rd place with 32 points.

There was great support from the Ladies whose sons all went to the College.

Best Teacher was Paul O’Keefe with a score of 36 points to the delight of his son Rory who came up from Cork.

Visitors were also well represented and Dermot Rainey’s score of 42 points was a great round followed by Pat McGrath on 38 points.

Young  4th year student Ronan Daly made it a double for the Daly clan with a solid 34 points. He held off the challenge of James O’ Donnell 33 points. and Adam Duncan also 33 points.

In the decades the 2000’s winner was former Captain David McCormick on 36 points.

1990’s winner was Patrick O’ Kane coming in with 35 points finishing strongly with a great birdie at the 18th hole.

In the 1970’s Kevin Kennedy whose trip from Dublin was certainly made worthwhile as the former Glencar man birdied the 17th having an excellent score of 36 points.

1960’s Vincent Mc Glynn who was 1st out in the morning the former  St. Eunan’s goalkeeper recording 36 points.

1950’s winner was Mick McGinley, MacRory Cup player of 1956 he just narrowly won over his great friend Sean Ferriter on the back nine.

The 1940’s winner was also fought out and John Breslin from Gweedore held off the challenge of Frank Shovlin (Donegal Town) and Leonard Roarty.

A special word of thanks to .PJ Nee for all his great work especially in the lead up to the competition.

Chris Darby (Principal of St. Eunan’s College) acknowledged the support of the Alumni and its continued growth as an important link to past pupils.

The Alumni committee were delighted and the atmosphere and fun at the Presentation was superb. The committee would like to thank Letterkenny Golf Club representatives Hugh McClafferty (Captain),  Maura Cavanagh (Lady Captain) and  Brian O’Reilly (President) who were at the presentation; The green keepers for the excellent condition of the course. The staff of Brown’s on the Greens whose catering and organisation was to the delight of all players.