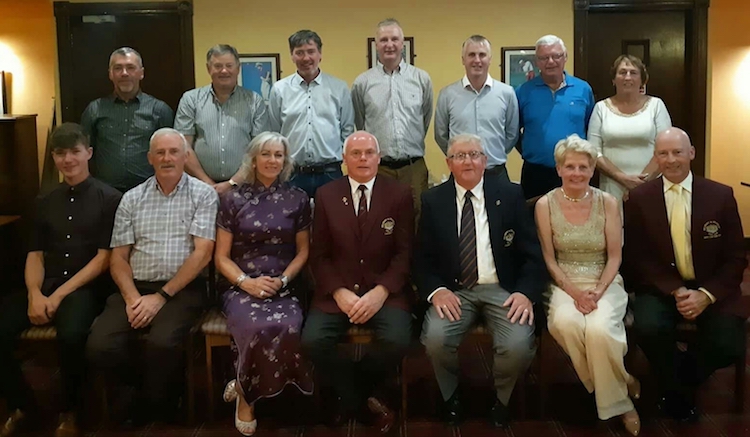 Paddy Mullan put in a brilliant display of golf on Day 2 of Mr Gerry Driver’s captain’s day in Ballybofey and Stranorlar Golf Club, to win The Captain’s Prize outright.

Carding two birdies and eleven pars in his round early on Sunday morning, and despite only having 34 points on day one, Paddy immediately got a feel good factor for the weekend.

During his wait he had to endure all of the leaders go out to add to what was some fine first round scores.

At the same time, the four gross players took the field and the overnight leader in this section was none other than young Ryan Griffin (B&S Junior Caption) who carded a fantastic -3 under par. Ryan’s competitors on day two were Martin McFadden, Roger Campbell and Matthew McAuley.

The young Convoy man was to hold his nerve and go one to win the Gross thanks to a change in the eligibility rules of the club at the previous council meeting.

The man rumoured as favourite after day one, Michael Scanlan with a very wise and experienced head had no answer to the eventual winner. Although being a very close and personal friend, Michael was delighted to see his fellow Early Bird member win the Captains Prize for 2018.

A fabulous night was hard after captain’s meal when Captain Gerry thanked everyone who had helped him so much throughout the year and made his workload a lot easier.

He thanked his  family and in particular his wife Angeline and  for all the support she had given him whilst taking the role of captaincy and she herself said a few words about the importance of young people taking part in sport for the good of their mental well-being.

Angeline herself is involved in cycle against suicide and knows the importance of socialising and keeping active.

Gerry heaped  a lot of praise on his Vice captain Seán Carlin and Lady Captain Josephine Stewart who where there for him time and time again when he needed them as were all other council members, bar staff and greens staff.

A presentation was made to Mary and the Lady Captain for their support.