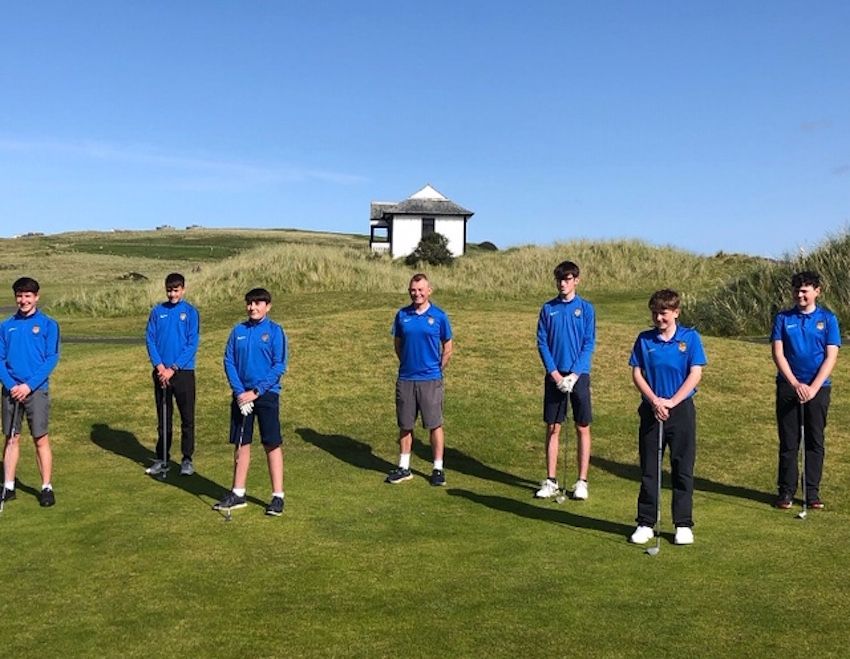 DUNFANAGHY Golf Club’s under 16 boys made it three County Championships in a row in a closely fought contest against Ballybofey & Stranorlar GC at the weekend.

The match was very kindly hosted by Frank Casey on the magnificent Sandy Hills course at Rosapenna and was in the format of three 4 ball better ball matches.

Captain James Sweeney’s team was led by the very accomplished pair of Darcy Hogg playing off scratch and James T Sweeney (4) who played some magnificent golf.

After 16 holes, the boys were -3 gross but lost to a very consistent pairing of Patrick Carr and Barry McMenamin playing off 10 and 11.

Patrick and Barry made the most of their shots on a beautiful day at the Rosapenna links.
The second pair out where Evan Hogg and David Daly.

In another very tight match, the Dunfanghy boys managed to secure victory on the par 5 17th hole where 6 handicapper Evan hit two magnificent shots onto the green and managed to two putt for a birdie.

David, playing off 10 also produced one of the shots of the day on the 11th hole where he managed to get up and down from a difficult downhill lie in one of Rosapenna’s deepest bunkers.

In the third match, we had another strong pairing of Rory Kelly (11) and Lucas Wood (16) who got off to a very strong start and never took their foot off the pedal, eventually winning on the 13th hole.

Rory produced a number of thundering drives which helped shorten the course and Lucas ably assisted with this usual steady performance.

Many thanks to Tony Carr, team captain from Ballybofey & Stranorlar for a very sporting match, to the Rosapenna Captain Barry McMenamin Senior and Frank Casey who very kindly hosted the event.